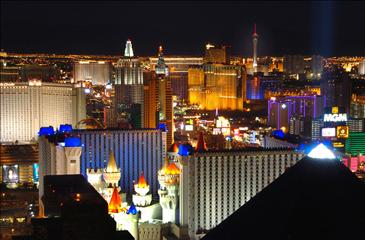 TYING THE KNOT, VEGAS-STYLE!
Las Vegas is known as much for its weddings as it is for its casinos. With an average of more than 120,000 marriage licenses issued annually, Las Vegas is recognized as the world's wedding capital. Whether it's eloping on a secret rendezvous, or planning an elaborate ceremony for hundreds of your family and friends, there is no place quite like Vegas to make it official.


GIRLS JUST WANT TO HAVE FUN
Sometimes a girl just needs a break from it all. And, what better way to recharge your batteries than with a few of your closest girlfriends? Whether you are celebrating an engagement with a bachelorette party, or celebrating a divorce with a group of other "survivors," Las Vegas offers a unique destination for women. If you're looking for a weekend of peace, relaxation and some bonding therapy with the gals, or if you want to live it up and party like never before, Las Vegas offers a wide variety of unique options for the perfect girls' getaway. Being a girl has never been this much fun!

JUST THE GUYS
In bygone days, men escaped the realities of life and bonded with their gender at frat parties, hunting expeditions or over tales of heroic war efforts next to a blazing campfire. A typical guys' night out included meeting the fellas for some beers, playing some billiards or poker, or watching sports. Today, when men really need to escape, they call up their buddies, leave the women and children at home, and take a "mancation." The "mancation," or man's vacation, is the latest trend in the travel industry involving a group of guys who just need to get away. And, nobody caters to a man's getaway quite like Las Vegas, the quintessential guys-weekend destination.

A GOLFER'S PARADISE
Las Vegas is no longer golf's best-kept secret. In fact, Las Vegas recently was named the top emerging golf destination in the world by the International Association of Golf Tour Operators.

From exquisite championship courses designed by legends of the sport to lush fairways and breathtaking views - golf is just another reason the destination attracted 38.9 million visitors in 2006.

SHOP TIL YOU DROP
If you want it, Vegas has it. From designer splurges to bargain deals, Las Vegas has become a one-stop shopping Mecca. Everything from colorful souvenir shops to haute couture boutiques can be found in retail centers along the Las Vegas Strip and surrounding areas.